Lessons In Life Are Learned Early

We might not know it, but some simple things we learn as a child can really impact us for the good as adults. If we do not learn as a child we should not blame our parents, because there is many ways to learn a life lesson. Sometimes children are not given money, chores or pets because of lack of trust, religion, culture, or a parent’s childhood. One thing we all need to remember we are all unique, we learn different ways than others.

Looking Back To Childhood 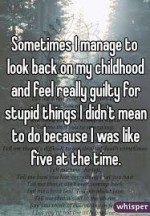 When I was a child I was given responsibilities. These were chores I was suppose to get done everyday because I was the man of the house. This confused me as a child. I am the youngest of two, I have an older sister, and at that time my Step-Father was more than able to take care of chores around the house. I saw it as they were trying to push “work” off on me. I thought, “If I have a job then I won’t have to do this dumb chores.”. I was such a fool when I was young. Although when I got my first job, it was a summer job, I felt appreciated, felt accomplished, felt like there was a meaning for what I did. It was encouraging to me. I thought at the time it was just the paycheck, but now I think it is more.

What does a paycheck mean to you?

When I got my first paycheck I felt accomplished. My first week was so stressful. I wondered if it was worth it, but the paycheck told me it was. We get a check either weekly or bi-weekly and it makes us feel the job is worth the effort because we need the income. Although when you were a child did you really know what feeling accomplished was like? I mean parents say “Thank-You” or “I appreciate” is great but giving an allowance not only makes a child feel accomplished it teaches the life lessons on budgeting.

How an allowance can teach a child money management

There are many ways a child can be taught money management. An allowance is the best way. Bank of America has seven tips on better money habits.

So now do you think giving a child responsibilities and rewarding with an allowance is good? Should they just get an allowance to learn how to manage money? Maybe you think an allowance is just another cost to you because you get the kid what they want? I want to know you opinion. I have mine. I think children should get it as a reward. They should also lose part of their allowance if some of their chores are not done. Actions have consequences. What do you think?

Do Not lose Your Passions

Halloween Near An Elementary School

Having A Job Reschedules Your Day

Sources for this page:

Better Money Habits, by Bank of America, with Khan Academy (2015)