Pittsburgh Steelers Bring In Rookie To Get Victory!

Who Should Be Quarterback: Jones or Vick

Wow I must saw wow what a game! I am into football and NASCAR, but when Michael Vick left at half-time due to pulled 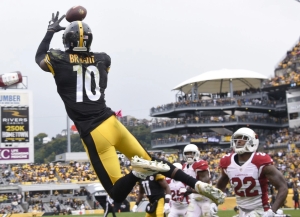 hamstring I was wondering what the Steelers would do. I saw this young kid walk in and wondered who is he? They said that this was his first play in the NFL fresh from college. I was so doubtful for a minute, and then…

The second half came and no Michel Vick, instead Landry Jones third string walked onto the field. It appears that Vick had pulled his hamstring. It seems like The Pittsburgh Steelers were in trouble. When Jones made his first play officially in the NFL he made a great complete pass. He completed 8 of 12 passes and scored twice. I did notice on flaw at least he needs to work on. He was doing continuous passes to Antonio Brown. This is not good. I have noticed Ben Roethlisberger has had this flaw too. He has a play that works he will keep doing it until he can’t get it to work.

Big Ben may be a veteran and know how to make a come back, but Jones still needs well defined. This is where Big Ben comes in good. Now I am not saying kick out the veteran and bring in the rookie, no never. I am just saying Big Ben is getting up there, his body isn’t as well as it was 20 years ago, and he needs time with family. I think this is up to him, but I also believe that he hasn’t retired because he loves the game and finding someone to replace him. Now that may be possible. I do not think it will be this year and more than likely not next year, but by 2017 I think if it all goes great Big Ben may retire and Jones may be the new starter. We will see.

Check this out too

Getting By the rough Road In life

Halloween Near An Elementary School

Check out more information from here: